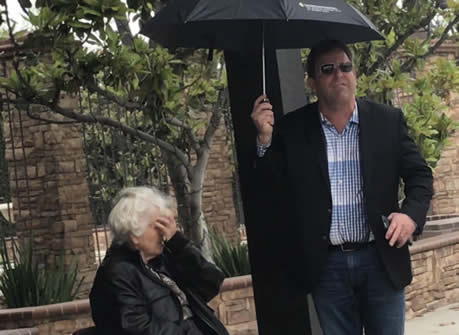 The American Way Cultural Center, Orange, California is the legacy and lifetime work of owner/builder Marty Adair and deceased husband, Richard James Adair. Her profitable event facility, her open yard storage that annually generates $216,000.00 and home have been stripped from her. Marty agreed to total liquidation of all her property, event equipment, antiques, and most of her personal belongings. She agreed so she could escape conservatorship. She agreed so she could flee to Texas and no longer be a witness to the dismantlement of her American Dream. She was only allowed to “pick a limited amount of her personal property to move to Texas”. Our parents did business in Orange for over 50 years. They lived on or adjacent to this property for 40 years.

Fiduciary Real Estate Services, Ruben Martinez and wife Teresa Gorman are being paid, by the conservator, Richard Huntington, to manage and maintain Marty’s property and collect rents. Instead, they are allegedly letting her event facility become decrepit, and bird and rodent infested. They have allegedly mismanaged her rental properties. Martinez and Gorman are allegedly linked to a decade or more of doing the same to other Orange, San Bernardino, LA and San Diego County properties. They allegedly devalue the conservatees properties, sell low to their “cronies” who then flip at great profit shortly after.

Marty’s, disinherited and financially cut off son, (for non payment of $500,000.00 in loans), Joe “Joey” Adair brought, for the second time, this allegedly fraudulent conservatorship. Joey and wife Darian Mathias-Adair, allegedly kidnapped Marty, cut off all communication with her daughters, lied about hiring an attorney to “help” her and took her to court for conservatorship. Joey used the same out of date addresses he used in his 2015 attempted conservatorship that was exposed then. He stated, under penalty of perjury, that the notification addresses to family were correct and to the second degree and that he was not a debtor to Marty. Both statements are untrue.

Marty had access to her own money in 2015 and avoided conservatorship for her and her husband who subsequently died shortly after that court battle. This time, she was cut off from her funds and given a Public Defender.

Joey allegedly “shopped” for a Dr. to write an evaluation of Dementia on his mother. He only presented to the court the last one that was generated after he “testified” for 3 hrs and 20 minutes to the Psychologist, Eileen Swan Kang, and got that diagnosis. Marty was put on unwarranted dementia medication. The other two Dr. reports, that only came to light because Joey was reimbursed for them, allegedly state Marty did not have Dementia!! After we were able to remove mom from Joey’s “care”, she was tested by several health care professionals and Medical Drs., including her own long time primary care physician, and they all said she did not have Dementia.

Joey had already lined up a “care” facility to dispose of our mother.

Eric Becker, in a hand written declaration to the court, stated that a GAL was appropriate…due to Marty’s moderate to advanced Dementia. This was days before the alleged fraudulent Psychiatric evaluation was even produced.(Reference photo). This was done without notification to any of the parties or Marty’s Public Defender. David Shaver was appointed. David Shaver has allegedly done nothing in the best interest of Marty! He has allegedly sided on a consistent basis with Becker, Huntington and Joey.

In order to complete the “change of residence petition”, Shaver allegedly petitioned the courts for one more Dr’s evaluation. Shaver decreed that no family members were allowed to speak with Marty for three days before the testing. Shaver spoke personally several times to the Geriatric and Forensic Psychiatry “Dr.”, Sarah N. Mourra, he hired and allegedly paid $6,500.00 to evaluate Marty. Shaver also spoke to the “Dr.” for 30 minutes before the testing. Marty was allegedly diagnosed with dementia as she is “paranoid because of a statement she made regarding her belief that Huntington and her son Joey want to KILL her”.

There are over 25 families in So Cal that will corroborate these claims, but are in fear of retaliation from them.

Signed, under penalty of perjury, is the estimated value of personal and real property and annual gross income. The total is $3,039,400.00. It doesn’t include the $19,000.00 a month in rent from the storage yards or any revenue from the event facility. The last offer for the property was $13,550,000.00. Huntington secured his bond based on that dismal amount. (Bonds are required and paid out of the estate. They are never gone after because attorneys are reluctant to go after their “own” and are a complete waste of money).

The conservator, Richard Huntington, of Marty’s estate has allegedly mismanaged and breached his fiduciary duties. Just a few examples… He has paid for multiple non permitted improvements and electrical work, including allegedly paying Joey $6,500.00 for work even though his contractor license is allegedly in question. He allegedly fails to give Marty any of the court documents about her case as all are forwarded to his office. He allegedly let Joey and Darian pillage and ransack the event facility and Marty’s home, stealing expensive jewelry, furs, a $800 safe and numerous vintage firearms. He didn’t file a police report, but paid to have the safe and guns returned, without the jewelry. Huntington reimbursed Joey for a coffee pot and numerous alcohol charges. (Marty doesn’t drink coffee or alcohol). He is allegedly dismissive and continually lies to Marty. Huntington “reimbursed for overpayment” several months of rent to many tenants, including one that also got a new AC unit after writing a fraudulent statement about the daughters to the court.

Huntington allegedly turned the water off and stopped upkeep on 20 Magnolia Trees and 89 Queen Palms on the property. His answer was that it all will be torn down so why maintain. Isn’t protecting and maintaining one of his jobs as a conservator? Was it in his authority to decide to tear down the event facility and not sell to someone that would use it for its intended purpose?

Why did Huntington not hold Joey accountable for the $10,000.00 in cash Joey forced his mom into withdrawing from the bank two days before he was appointed conservator? Joey alleged that Huntington saw the cash and they “played with and counted it”. Doesn’t that prove an alliance with Joey in favor of his conservatee and her daughters.

This group allegedly lies to the conservatees and their families. They try to insight dissension amongst family members to justify their involvement. If anyone tries to expose and stop them, they are labeled vexatious litigants, alcoholics, drug addicts, mentally disturbed, etc. and threatened they threaten them with “cease and desist orders”. They claim that their bills are so exorbitant because families challenge their alleged reckless draining of the estates and billable hours that are often redundant. If we hadn’t found out about the conservatorship, from one of Marty’s employees, and fought this, she would have been put into a “care” facility and possibly died.

Marty and her three daughters are mentally and physically drained from this ordeal. Marty only had $1.5 million in debt on her $15 million property. No foreclosure liens were initiated. She was working with the IRS to remedy her past due taxes. Her daughters were working on refinancing her loans and setting up a trust before this began. The mental anguish, of watching all that she and her family built desecrated and dismantled, is more than she can bare. The fear that her son will succeed and have her “committed” is overwhelming.

In my opinion, we are being “blackmailed” into a settlement agreement stating we will agree to all their outrageous fees and hold them harmless for any damages, among other things. Huntington agreed to step down as Conservator after Marty’s Chapter 11 was approved in bankruptcy court appointed him the Trustee of her estate. (Huntington allegedly tried to hide the fact he would become Trustee). Huntington and his attorneys, Becker and Morris refuse to honor their agreement until their fees are all paid including David Shaver’s.

In my opinion, they will continue to “milk” our mom’s estate until all the money has run out. For positive until 2022 as the bankruptcy plan states.

“When you want a piece of land, you find a way to seize it. When you want someone’s house, you take it by fraud and violence. You cheat a man of his property, stealing his family’s inheritance. But the Lord says, “I will reward your evil with evil; you won’t be able to pull your neck out of the noose. You will no longer walk around proudly, for it will be a terrible time,” Micah 2:2-3

Players:
“Joey” Richard James Adair and his wife, Darian Mathias-Adair
Their current attorney for this case and last, Jeffery A Slott, Encino, CA (Originally represented by Eric Becker until forced by Public defender, Holly Galloway to choose. They chose to only represent Richard Huntington after saying to Galloway they were going with the “cash cow”.

Conservator, Richard Huntington, Professional Fiduciary Services, Laguna Woods, CA (possibly Peter C Kote that was on another probate case with him and partner in his company)

David Shaver, Bunt and Shaver, Santa Ana, CA (brought on case by Becker in his hand written declaration to court statement saying mom had “sever dementia” and her public defender was only representing what mom wants and what may not be in her best interest, 4 days before phony Dr report was even written). He never met mom until months after this case started and only after persistent requests from daughters.

Judge Gerald Johnston we don’t believe is part of this conspiracy.

What we are seeking…other victims that can corroborate and expose this band of thieves.

To save mom’s property and to keep her in her home!
To stop their rat eating debt that they are saddling us with and stop the bleeding of money from mom’s estate.
For the mighty hand of God to prevail and set our mom and her estate free!