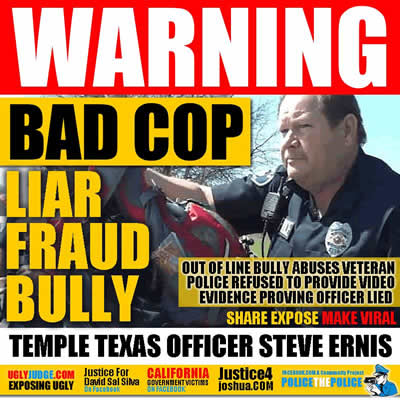 Officer Steve Ermis
Example how BAD COPS can use the system to terrorize and abuse innocent people. How the system is so corrupt up the ladder of the courts who support and act as accessories to these crimes. These are public servants who never protect the public instead use their positions to take advantage of the public and act ABOVE THE LAW. 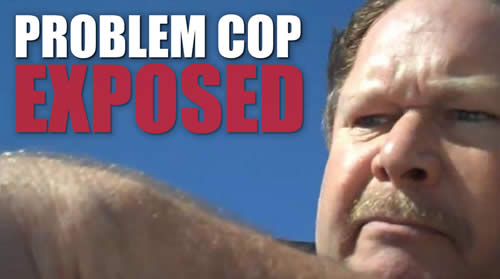 A must watch dash cam video proving how really STUPID people can become police officers. Total ignorance, the lying which was caught on video and in court. The perjury in reports and the fact these officers are creating dangerous situations where someone could have been killed after which our courts would help these criminals escape punishment. Note the officers state in the video they’re not required to obey the law.

CJ Grisham was arrested while hiking with his 15-year-old son, who was working on the requirements for a Boy Scout badge.

CJ Grisham was carrying an AR-15 rifle and a concealed handgun, for which he had a permit. Texas law allows for rifles to be carried in public.

Someone reportedly called police expressing alarm over a man carrying a rifle along a road. Officer Steve Ermis responded and, according to court testimony, was initially concerned because he didn’t know CJ Grisham’s intentions.

Rannefeld argued at trial that CJ Grisham was carrying the rifle to protect against aggressive wild hogs. He reportedly said Officer Steve Ermis “went above and beyond to control and intimidate,” when he stopped the two.

CJ Grisham’s son used his cellphone to record the confrontation.


Will you shoot Americans VIDEO