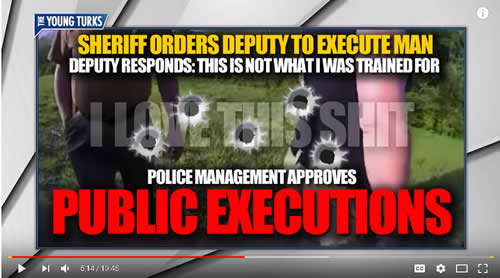 Shortly after Tennessee law enforcement shot and killed a man during a two-county vehicle chase in April, White County Sheriff Oddie Shoupe seemed fired up as he recalled his conversations with dispatchers.

“They said, ‘We’re ramming (the suspect),’ ” Shoupe told a deputy in body-camera footageobtained by CNN this week. “I said, ‘Don’t ram him. Shoot him.’ “F*** that s***. You’re gonna tear my cars up.”
Shoupe later says of the chase, “I love this s***. God, I tell you what, I thrive on it.”
The comments, recorded April 13 after the sheriff arrived at the scene where officers shot and killed Michael Dial on the side of State Route 111, are at the center of a federal lawsuit filed last week by Dial’s widow against White County, Shoupe and others.
The widow, Robyn Spainhoward, alleges that a White County sheriff’s deputy and a Sparta police officer used excessive force to kill Dial, 33, of Clarksville, Tennessee.
Shoupe, in the body-camera video, says he was in another part of the county during the chase but gave orders to dispatchers that would be relayed to the pursuing officers.
In the video, he says he “gave the order to take him out because he (Dial) was going to kill somebody if we hadn’t.”

The lawsuit, which seeks up to $10 million, alleges that the sheriff ordered the shooting “solely to prevent damage to patrol cars.”

Sheriff caught on body camera saying “take him out”