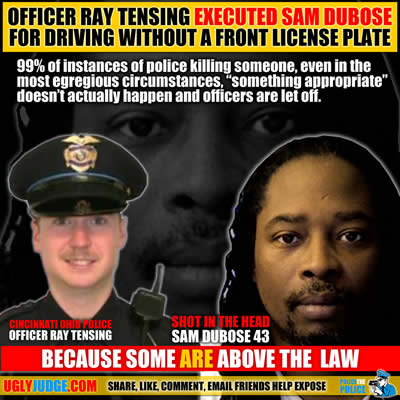 Officer Ray Tensing shot an unarmed man in the head
After a routine traffic stop by a University of Cincinnati Police Officer, Sam Dubose is dead with his face blown off. The officer was wearing a body camera, but the city refuses to release in the video. Everybody who sees it is deeply disturbed, including the citywide police chief. The truth hurts and police don’t want you to know what they’re doing.

Before a University of Cincinnati officer shot Sam Dubose in the head Sunday night, he was pulled over for a missing front license plate on his vehicle.

That traffic stop led to a struggle over Dubose’s car door after the 43-year-old refused to exit his vehicle, UC Police Chief Jason Goodrich said at a news conference Monday.

Beyond that, investigators said they still know very little about what led UC Police Officer Ray Tensing to open fire, killing a man friends and family called “fragile” and “frail.”

Goodrich said Monday Dubose was without a driver’s license and had an open bottle of alcohol in his vehicle when Tensing pulled him over. Goodrich said Dubose and Tensing struggled over his car door before Tensing fired his weapon.

99% of instances of police killing someone, even in themost egregious circumstances, “something appropriate”doesn’t actually happen and officers are let off. It’s time this was changed. Demand Equality for America, real equality not the lie we’re sold