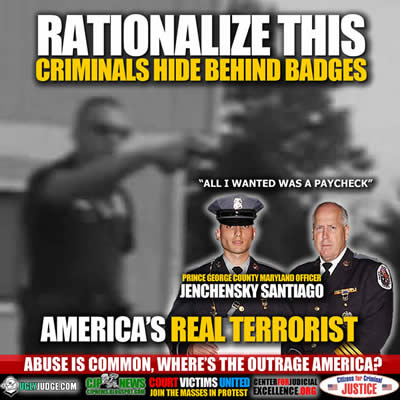 How many people were victimized by Prince George County Officer Jenchesky Santiago before they finally listened? This is actually very common that bad people get hired because they seek authority and power (deadly force) to which they abuse that power. Being “above the law” which no one should be the public trusts in a false image. Similar to a wolf in sheeps clothing scenario, this also takes place in other areas of our legal system, judges, lawyers, prosecuters all who often play with people’s lives and send the innocent to death row. More and more we see people being released from long prison sentences who were railroaded by egotisical police or prosecutors who ignore evidence and fact in pursuit of selfish control and rightousness. THe problem is when it’s discovered that the wrong person was indeed railroaded nothing is done to those who committed the crime.

Here we have Prince George County Officer Jenchesky Santiago who pointed a gun at an innocent man’s head and he’s not even remorseful about his actions.

Prince George’s County, Maryland, police officer, was sentenced to five years in prison without parole Friday after being caught on camera holding a gun to the head of a Bowie man who had been trying to enter his own home.

Jenchesky Santiago, 26, was convicted in December of first- and second-degree assault, use of a handgun in the commission of a crime of violence and two counts of misconduct in the office related to a May 2014 incident. He was sentenced to the mandatory minimum prison term of five years after having faced upwards of 45 years behind bars.

“Mr. Santiago violated the rights afforded to Mr. Cunningham and every citizen of Prince George’s County and no citizen should ever suffer such disrespect,” said Angela Alsobrooks, the state’s attorney for Prince George’s County. “Mr. Santiago’s actions that day and the fact that he continues to show no remorse for what he did and believes that the victims should actually apologize to him, shows that he had no business serving in our police department.”

Cellphone video of the 2014 altercation showed Santiago drawing his department-issued handgun and holding it to the head of William Cunningham, a Bowie resident who had been parked outside of his own home.

“I dare you to [expletive] fight me, son,” the officer was heard saying in the video.

In a recorded phone conversation that took place after last month’s conviction, Santiago told his mother that Mr. Cunningham should have to apologize, “because all he wanted was a payday.” FULL STORY

Nine out of ten times Police point guns where there is NO THREAT even at children and nothing is done, Take Ken Sheppard of Los Angeles for example. These are the acts of Totally irresponsible people who should never have been hired. Lets not forget the Sonora County Sheriff Child Killer cop Erick Gelhaus who had a history of pointing guns at people’s heads. The problem is when Police mangement ignores reports and even promotes problem cops.

Cop Points Gun at Man’s Head for No Reason