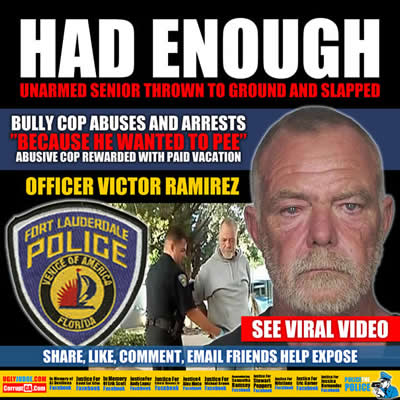 Cop Throws Elderly Man Down, Slaps Him in the Face, For Trying to Use a Restroom
Fort Lauderdale police officer caught on camera slapping homeless man
Officer Victor Ramirez Slaps Alleged Trespasser Who Wanted To Use Restroom

Bruce Laclair  is speaking up after an officer responded violently to his request to use a restroom Sunday.

A witness caught the incident on a cellphone camera. In the footage, the man, Bruce Laclair, is seen walking near a Downtown Fort Lauderdale bus station. An off-duty Fort Lauderdale Police officer, Victor Ramirez, trails Laclair while putting on rubber gloves.

Ramirez is also heard telling Laclair he will not use the restroom. “You are not going to go pee. You’re not supposed to be here,” Ramirez said.

At some point, Ramirez slams Laclair to the ground where he is seen seated. But then Ramirez grabs Laclair’s arm and orders him to get up. The video then shows Ramirez aggressively slap Laclair across the face. The sound of the smack is audible and the force of it sends Laclair head-first to the pavement. The officer handcuffs Laclair, and Bruce Laclair is taken to jail.

After being released from jail Monday, Laclair said he was unsure what happened. He said he had only wanted to use the bathroom. “All I was asking to do was use the restroom. That’s all I was trying to do,” he said.

But according to Ramirez’s police report, Laclair was asked to leave after sleeping at the bus station. “I asked him to wake up and go somewhere else,” Ramirez wrote. “I gave Laclair plenty of time to leave.” But Officer Victor Ramirez left out the part about striking Laclair in the face and slamming him to the the ground.

Ramirez has been suspended with pay. The Fort Lauderdale Police Department has also opened an investigation into the incident. Captain Frank Sousa tried to distance the department from Ramirez’s actions. “If the officer is wrong, I can assure you and the public that this agency and this department is going to do whatever it needs to do to assure that that doesn’t happen again, and it’s not a reflection of the men and women in this agency,” Sousa said.