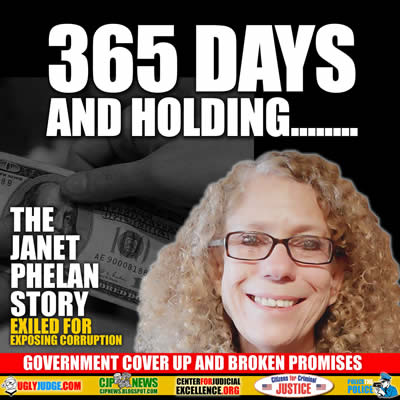 Janet Phelan Reporter at large EXPOSING corruption, abuse and crime within our government

It was a year ago today that I filed a request for precautionary measures with the Inter American Commission on Human Rights. The request asked for certain measures to be enacted for my safety and security—including that a guard be provided at my home for the periods of time I have to leave, in order to deter the repeated and illegal entries into my home.

Precautionary measures are considered to be emergency measures and the IACHR is mandated to deal with them as such. SEE THIS STORY

I’ve been waiting for a year for my request to be dealt with. In that year, my home has been entered dozens of times. Documents have been stolen, computers have been smashed and at one point, a jug of grape juice was poisoned. I collapsed, but thankfully did not die.

As many of you know, I am a journalist by profession. You may not know that I was forced to flee the US in 2008 and that upon publication of my book, EXILE, which details the circumstances that forced me to flee my own country, my situation in my host country became fragile. When I filed my request with the IACHR, I named the host country as the perpetrator, acting upon orders of the United States government. Globalization at its worst…..

But the IACHR is now appearing to be afflicted with the same moral disorder that has compelled a Latin American county to take up the banner of the US’s vendetta. The venerable Commission appears to be acting as agents of the country whose murderous policies, directed against the elderly and minorities, were discussed in detail in my expose.

Ever so politely, the IACHR is simply failing to process my request.

My request for precautionary measures, enumerated as 16-559, is listed as “under study,” which is the initial stage for any entry into the IACHR system. Human rights law firms and journalists have contacted the IACHR to ask why no action is being taken on my issue. They have received no response. In the meantime, a review of the IACHR website reveals that they are now granting requests for precautionary measures filed in 2017. Mine was filed in July of 2016. It has clearly been shuffled to the bottom of the stack, if not put into the garbage can.

In her article concerning my plight, published last October, Katherine Hine wrote: “For years, Phelan’s journalism has dealt with issues of public corruption in the United States. In 2011 she traveled to Geneva on behalf of the organization ITHACA to be the first and only reporter to expose the enactment of Section 817 of the USA Patriot Act in which the US. gives itself immunity for violations of its own bio weapons legislation .She’s also the first reporter to publish photographs documenting what appears to be a domestic delivery system for a bio/chem attack within the United States. She was one of the first reporters to publicize the ongoing abuses being committed by US. probate courts that authorize the plundering of the assets of the elderly and disabled whose lives are then cut short through court authorized drugging and isolation, a multi-billion dollar scandal now recognized even by corporate media.”  SEE THIS STORY

I would like to add to that list that I have now uncovered a scam by which state court judges are in great number laundering bribes and pay-offs, through their home mortgages.

Scandal on the Bench

It is one of my core beliefs that we are put on this earth to try to make it a better place, a place where life and art and love and beauty and faith can flourish. I am facing challenges now in simply staying alive and it is with some reluctance that I find I must now try to bring more attention to myself. I frankly abhor doing so. But given the challenges that are now facing my continued existence, I am asking those reading this to be please be aware that yet another journalist is under significant attack and those who have pledged to protect human rights in the Americas won’t do a damn thing about it.